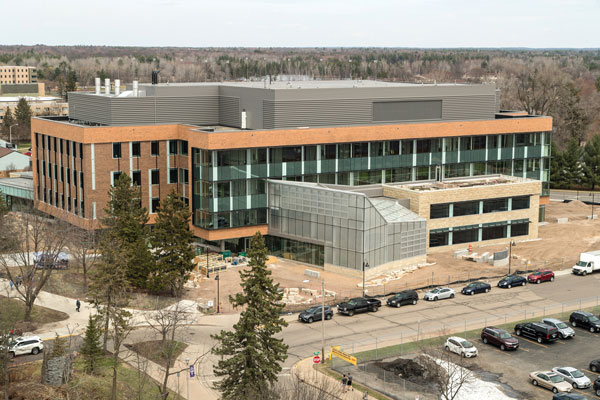 “We put the membrane down in 2016 – the roof membrane that’s beneath the vegetative growth, which serves as the main waterproofing,” explained Lucas Kramer, project manager and estimator. “We followed up over the next two years with finishing up the Green Roof. It was a long project with it being new construction and not wanting the construction to happen over the vegetation.”

Featuring a walk-out patio at the second floor level, visitors can enjoy the planter boxes installed and designed on the roof.

“The patio is part of the chemistry and biology department, and students are able to plant crops in those boxes,” explained Kramer, adding that there were many architectural elements that went into the roof’s design.

“Since it was going to be a heavily-trafficked roof and there were certain features that were going to be within reaching distances, there was curbing, a pedestal paver system, aluminum planter boxes, and then media growth installed,” he said. “There are boulders up there and swales of dirt. It was a very intricate design and install.”

As a subcontractor on the project, Quality Roofing was substantially involved in the pre-planning process with the State of Wisconsin in order to get the unique system approved.

“We got the system approved and then from there we did a lot of preparation with the general contractor and the State of Wisconsin,” said Kramer. “Obviously when doing a media or vegetative roof like this, we have to make sure that we get these plants in when they are going to be able to thrive with the seasons.”

Quality Roofing was also very involved in the scheduling process, due to the unique nature of the construction. Having completed other smaller scale solar panel roofs and LEED-certified projects, Kramer and his team were familiar with white membrane roofs and the specific water proofing involved.

“It’s an engineered design, so it’s important to make sure the structure can withstand something like this,” said Kramer. “The projects are very complex, especially figuring out your image. There is a lot of dirt and concrete on top of a building and it needs to be able to drain property and support the system structurally.”